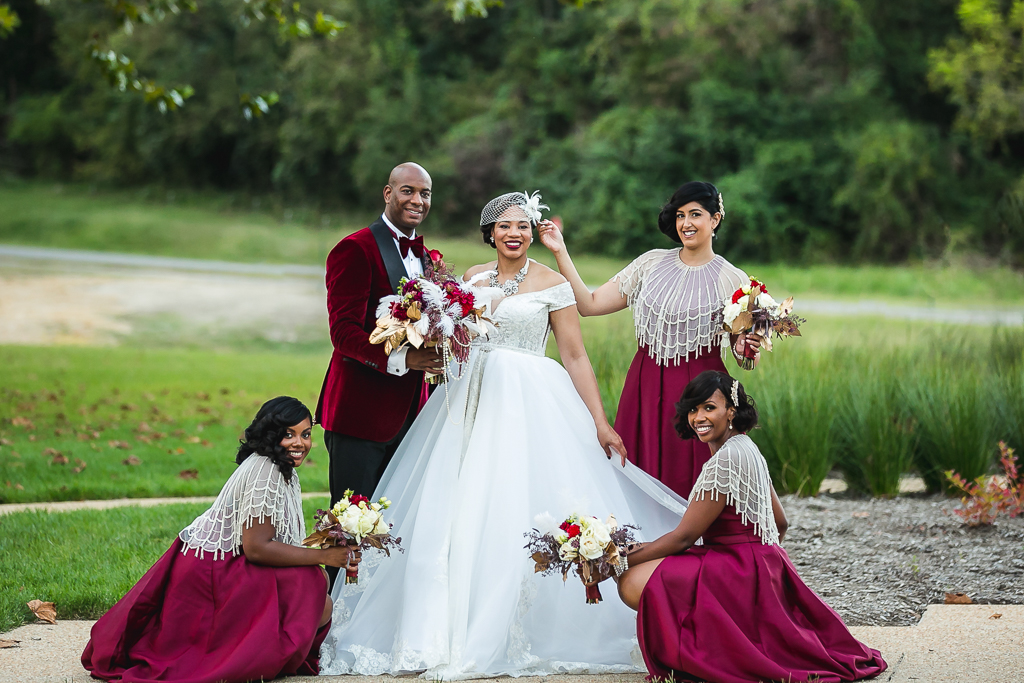 On an evening seemingly no different than any other, while at a restaurant, Sophia Coleman came across a friendly gentleman. Serendipitously, he happened to be the best friend of David Harris; the man Sophia would later meet, fall in love with, and marry.

Upon meeting Sophia at that restaurant, David’s best friend instinctively knew the two would be a perfect match. After having an opportunity to briefly get to know her better, he asked Sophia for her telephone number to pass along to David. After several months, David finally phoned Sophia (due to the delay of the best friend relaying the information) and the two agreed to meet for a group date at Clyde’s restaurant in Alexandria.

Sophia was immediately taken aback by how handsome and tall David was.

She was even more impressed by his beautiful smile, calm demeanor and deep voice.

David was awe-struck by Sophia’s beauty and was pleasantly surprised by the fact that his best friend was such a great matchmaker. During the evening the blossoming couple’s conversation flowed effortlessly. With every word Sophia spoke, David’s admiration grew. He was fond of her knowledge and intrigued by how closely aligned their life visions were; thus inspiring a second date.

On their second date Sophia was running 1 hour late. However, despite Sophia’s tardiness, David was so intrigued by their initial conversation on the group date that he wanted to learn more. So he waited. And, the wait paid off ten-fold. Their second date was filled with deep conversations about life, their interests, and visions of entrepreneurship which lingered until the location closed for the evening.

That date evolved into a 3 year romance which culminated into a romantic proposal during Sophia’s 35th birthday celebration. Picture this: David’s house was filled with their closest friends and family. After Sophia made a wish and blew the candles out on her birthday cake, David got down on one knee and said, “I don’t know what you wished for but, Will you be my wife?”

Sophia and David’s vintage-inspired fall wedding was filled with charming characteristics that recaptured the regal style of the past, while embracing a modern luxe elegance.

The couple and their guests enjoyed the perfectly refreshing weather of an early October day, with stunning views of the Occoquan River. Their opulent outdoor wedding was accentuated by fabulous floral flourishes with romantic hues of merlot and gold throughout the decor.

I achieved the couple’s vision for a timeless, classic, yet vintage aesthetic. Sophia’s favorite detail was the vintage look of the wedding party’s dresses covered with intricate lace detail – and David’s, of course, was his velvet tux that exuded classic style.

It was my pleasure to design a theme with such distinct elements and custom touches, such as the phenomenal cake designed by Edible Incredible, fashioned as an exact replica of a Louis Vuitton Steamer Red Weekend/Travel Bag.

I discovered fanciful ways to incorporate the couple’s exuberance for vintage flair into every aspect of the ambiance. Each table was adorned with arrangements of flamboyant feathers, luxurious pearls and glamorous gold leaves; exemplifying the very best in unique and custom floral design by BCG Eventshttps://www.bcgevents.com/.

David and Sophia celebrated their love and partied the night away with friends and family amid the wistful, romantic and reminiscent world of their special  day.

They made a grand exit by stepping into the confines of an exquisite, antique Duesenberg; reminding me of a moment that could have been borrowed from the hip Harlem Cotton Club era, with the glamour of The Great Gatsby, topped with modern day swag.

I extend the warmest congratulations and well wishes to David and Sophia! Their nuptials were a nod to the past; a reflection of old souls looking toward their future with new eyes, merged by two beautiful hearts intertwined.

David and Sophia’s wedding was featured in the print edition of Munaluchi Bride.